Roderick C reports from a meeting organised by the Greece Solidarity Campaign. 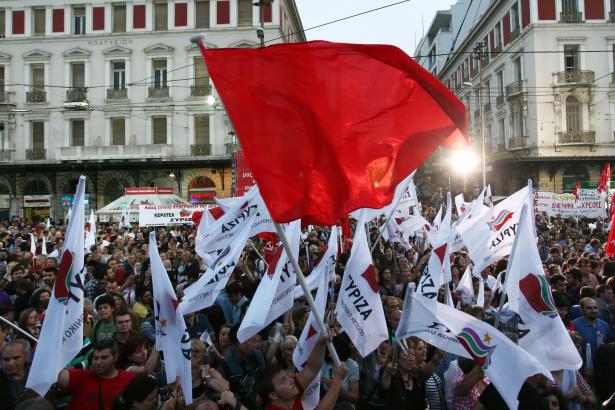 The election briefing event organised by the Greece Solidarity Campaign covered two main themes: Firstly, an urgent appeal, hammered home by various speakers, for a massive campaign of international solidarity in support of a SYRIZA government. Second, a quite complex discussion about the challenges any SYRIZA government would face, and how it would respond to them.

The meeting was addressed by Costas Douzinas, a Law Lecturer at Birkbeck, and Stathis Kouvelakis, a lecturer at King’s College and SYRIZA member, and Paul Mason. Douzinas spoke about how the upcoming election ends three historical cycles that began respectively in 1949, 1969 and 1989. These he identified as the end of the Greek Civil War and the subsequent marginalization of the left in Greek politics, the defeat of the ’68 movement, and the launch of the “new world order” caused by the supposed “end of history”. His argument appeared less than convincing to my ears, as was his argument that the Labour Party could “gain courage” to move left if SYRIZA won and was able to implement its programme.

Kouvelakis focused on the massive pressure that SYRIZA will face once in government from the European ruling class and insisted that the left across Europe must rally to Greece’s aid. He also described the programme that SYRIZA would enact once it reached governmental power, which would essentially focus on reversing many of the cuts that have been imposed, including wages, benefits and pensions cuts, scrapping many of the new taxes and enacting other emergency measures to deal with what he called Greece’s “humanitarian crisis” as he put it.

From the floor, Romayne Phoenix announced that the Green Party had formally decided to send a message of support to SYRIZA, and welcomed the fact that the Greek Greens had decided to stand under the SYRIZA banner. This was just one of several calls for international support for Greece. This was described in terms that might be regarded as hyperbolic, with some speakers describing the situation as similar to that of Hands Off Russia in the years following 1917, or the Spanish civil war. Douzinas compared it to the campaign against the Vietnam War – which he admitted sounded melodramatic. Others were more critical. Simon Hardy of Left Unity was one of several speakers who touched on the concerns that SYRIZA will, either willingly or not, end up abandoning its radicalism. Hardy in particular queried the apparent dropping of a commitment to bank nationalization. Kouvelakis’ response distinguished between SYRIZA’s willingness to negotiate with the Troika over the debt and its commitment to end the Memorandum and introduce its domestic programme, which he said was not up for negotiation. He added that although it was SYRIZA policy to stay in the Eurozone, if faced with a choice between the Euro and abandoning its programme it would not abandon its programme – a statement with I thought quite clear implications.

On the specific question of bank nationalization, he said this was a goal but not part of the immediate emergency programme that SYRIZA will have to concentrate on once it is in government. This and other more far reaching measures will come later, he said. This could be interpreted cynically, but it may be tactically necessary for any radical left party in SYRIZA’s position to refrain from making commitments of this nature at this point.
This was certainly the view of Paul Mason. Arriving late, he outlined what he thought might happen after January 25. He believed there was a high probability that Merkel in particular will seek to be flexible and strike a deal. He highlighted that there were ways that SYRIZA might be able to pay for its programme, including being allowed to use a £7bn cash reserve that Greece is currently obliged to maintain, and measures related to planned new rounds of quantitative easing, which might be used to allow Greece to find money via T-bills. He argued that the Greek debt was unpayable and would need endless rescheduling and suggested that it would be expedient for the troika to allow Greece to ease austerity. He also argued that it would be impossible for SYRIZA at this point to announce plans for bank renationalisation. Greek banks are only solvent due to ECB backing and so any such publically announced plan would create the massive risk of the ECB pulling the plug on the Greek banking system.

Mason’s general analysis was backed from the floor by James Meadway, Senior Economist at the New Economics Foundation. He argued that the room for manoeuvre by both the troika and Greece had grown substantially since the earlier phase of the Greek debt crisis, and predicted that the dramatic confrontation between SYRIZA and the European ruling class might not happen in the immediate future. Whilst not implausible, this does beg an important question. Would a compromise that allowed SYRIZA to partially reverse austerity measures in practice mean that the austerity agenda would have to be abandoned?

The meeting highlighted that although there are reasons to be cautious about the prospects for what happens after January 25, it would be wrong to be too negative. SYRIZA is an untested force, and much of what Kouvelakis said in particular was encouraging in terms of the likely willingness of SYRIZA to fight for its corner once elected. Both SYRIZA speakers were very clear in their view that the mass movements on the streets were central to their strategy, and that they were not interested in everyone going home and leaving them to govern. Kouvelakis explicitly hoped that the movement would increase after the elections and not die down. If the troika do back down on their austerity agenda, it would give a real breathing space to Greece as well as representing a real victory for the left. It would be foolish to underestimate the importance of what might happen on the 25 January. It could turn out to be an epochal moment for the left, and everyone should consider its implications.

Repression of migrants in Greece

Greece and the politics of natural disasters